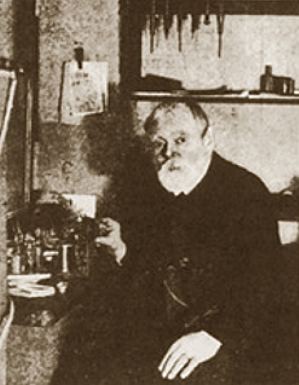 This story begins in 1845, when the eighteen-year old Gustaw Gerlach arrives in Warsaw from Berlin, accompanied by a pastry chef Karl Emil Wedel (founder of perhaps the most well-known confectionery establishments in Poland) and Frederick Plus (creator of the well-known and highly regarded in the nineteenth century, the Factory of Soaps, Toiletries, Perfumes and Cosmetic Products).

Gustaw Gerlach, as a werkmajster, is employed in the optical instruments manufacturing plant in the Krakowskie Przedmieście Street (main buisness street of nineteenth century Warsaw).

He is doing well enough that at first he becomes a partner, and in 1852 repays the previous owner and takes over the factory.

From now on the products will be marked as „G.Gerlach”. Soon, Gustaw Gerlach decides to change the location of the factory – he moves it to Tamka Street 38/40. He also opens a shop with his products on a prestigious street in Warsaw. He will later open another shop in Warsaw, as well as opening one in Moscow and Saint Petersburg.

The factory is doing great, manufacturing optical and measuring instruments not only for the Russian occupied Poland, but also for the whole Russian Empire. 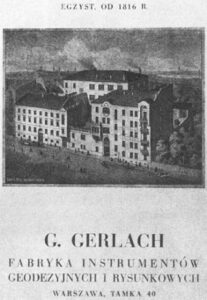 It’s a good time – the Russian Empire is starting to industrialise more and more – new investments are created, railways are build, the designs factories and their infrastructure are nearing completion. This means that the empire is in need of theodolites, levelling instruments and draugtsmans equipment. All of those are supplied by the G.Gerlach factory. Soon (in 1882) the factory receives the privilege of being able to sign their products and adverts with the Empire’s coat of arms.

Gustaw Gerlach’s wealth is increasing. He starts to contribute to some charity work – especially the Warsaw Charity Association and the Evangelical Church, of which he is a member. He also encourages his sons to carry out charity work as well as their jobs.

Gerlach builds a sundial on a tenement house located on Tamka street, which remains a typical element of the Near-Vistula district in Warsaw up until the Warsaw Uprising in 1944.

When he turns 60, Gustaw Gerlach retires and passes the company onto his two sons – Emil and Gustaw. They receive the brand name and decide to keep developing the family business.

The brothers decide to carry on with their fathers charity work – they fund the sanatorium for Breast-related diseases and Emil Gerlach is a member of the Warsaw Anti-tuberculosis association. The Gerlachs are also patrons of the famous „Polish Theatre”. 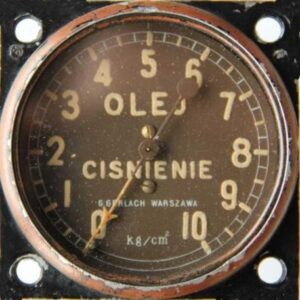 This combination of entrepreneurship, talent, great technical knowledge and fantasy together with a huge social awareness makes the Gerlachs very inspirational to many people in Poland. Those values place them within the most recognisable Poles.

In 1919 the Gerlachs sell the factory to their cousins – Henryk, Gustaw and Emil Ludwik Voellnagl,who will extend the product line by e.g. airplane instruments and compasses. Manometers made by G.Gerlach will be fitted to the PZL.37 „Łoś”and PZL.23 „Karaś” bombers as well as the PZL.11 fighter planes. They will also be used in the reborn, Polish naval industry.

Unfortunatelly, the factory and residential buildings on Tamka street were destroyed during the Warsaw uprising in 1944 and were never rebuilt.

The destruction of the building also meant the end of the factory’s life. After the war, Emil Voellnagel tries to recreate the business on Próżna street, but due to the post-war economic and political state of the country it turns out to be impossible.